Once upon a time, Cinderella was transformed to a princess for a weekend, and flown to Broome. Her fairy godmother QANTAS cast the spell after viewing Cinderella’s competition entry video. You see, in this story, it wasn’t a prince looking for a princess but QANTAS sharing the celebration  of their 30 years of Frequent Flyers program with ordinary folk , also celebrating a special milestone in their lives. The competition involved either 25 words or less, explaining the milestone ( but as those that know this Cinderella know, this wouldn’t even see me finishing my introduction ) or a 30 second video. With a picture saying a thousand words, Cinderella saw this as her best chance. Her milestone was 30 years of marriage.

Proud of her effort she waited anxiously for the day the winners were to be announced. The day came and went and Cinderella thought the fairy godmother hadn’t chosen to be hers. But, just a day or two later, a phone call informed her she was in fact going to the ball….oops Broome. With a loud “Whacko the derrio” in the ear of the poor girl on the other end of the phone she zoomed on cloud nine before deciding just who her  lucky 3 guests were to be.  She took her own prince, and to accompany them were to be her son and daughter in law. 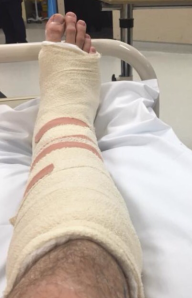 But fairy tales are narratives, and as such need a complication. This came in the shape of a broken ankle for her son. Surgery to place two pins and a metal plate ,  the wearing of a  moon boot and nil weight-bearing  provided  the complication. Seeking solutions she was met continually at brick walls as she searched her family for who to take now.  Her daughter and life-partner couldn’t make it logistically due to distance. Two sisters – maybe- but again one was distance challenged. Two  sets of ‘inlaws’ arghhhh….but then, one hadn’t been to Broome. And so the complication was solved.

She started her magical adventure at Sydney Domestic Airport. After check in ( yes she needed a bag for all the clothes and accessories she would need for her 34 hour adventure) she headed off to the first ‘ballroom’ aka QANTAS lounge.  Entering the ( normally for her) forbidden doors she glided up the escalator with a grin rivalling the Cheshire Cat!! She wallowed in the fun, made herself a toastie and lined up for a barista coffee.

Then, the flight board announced time to move to the next ‘ballroom’. Cinderella flew in the luxury of a private QANTAS flight on a 737-800. She sipped on cocktails and wine as a princess should. She ate foods that a princess should. The staff was so magical and ensured she was treated like a princess should be! On arrival in Broome a fairy godmother ( aka flight attendant) went the extra kilometre to allow Cinderella to sit in the business class seat and the flight captain let her peek in the cockpit.

Cinderella’s bucket list already had so many ticks. Could it get any better?? Well it is a fairytale so we know anything can and does happen. Whisked away on a charter bus, she arrived at the resort to be entertained by a champagne reception. Even Mother Nature played her part with temperature ( 30C – excellent winter’s day !!)  and the bluest of clear sky.

Entering her room at Kinberley Sands Resort, Cinderella noticed two bags of goodies.  Each contained a beautifully soft, large round beach towel, QANTAS bag tag ……and wait for it…QANTAS pyjamas- something Cinderella had only ever dreamed of, being an economy flight traveller. The room was beautiful and overlooked an azure pool, which at night was lit to a beautiful deep sea blue.

A splash in the pool and then it was time to prepare for the dinner to be held at Cable Beach. A white dress affair, Cinderella managed to borrow suitable attire from a friend. It’s quite hard to find white summer clothing in the middle of a freezing winter.

The sunset at Cable Beach deserves a photo. The hues change and colours deepen as the sun slinks to hide behind the ocean. As an east coast girl, sunset over the ocean thrilled Cinderella. Silhouetted against the sunset, a camel train made its way over the sand. A smoking ceremony signalled the beginning of the evening feast. And that it was, a feast for all senses!! Dinner was a night of sparkling pearl white, with a delicious menu to devour, washed down with quality wines, while listening to a melodic duet. Cinderell ate and drank like a princess should and had many laughs and interesting conversations.

Next morning, saw Cinderella partake in a sumptuous breakfast before heading to Willie Creek Pearl farm. Here she held pearls that she could only have dreamt of ( one worth approximately $8000),  and enjoyed learning about the pearling industry, before taking a short cruise on the crystal blue waters to see the pearl farm.

Regretfully now  for Cinderella, the hands of the clock seem to speed up. Before she knew it, she had boarded the flight home and was seeing the familiar sight of the marvellous harbour that is Sydney.  Her fairy godmothers and godfathers, in the form of QANTAS  staff, waved her a fond farewell . Cinderella doubted they could ever know the impact their actions had made on her. She did tell them, but knew they deserved more.
On behalf of Cinderella I want to thank QANTAS for running this competition . I’ve often been a naysayer thinking these types of competitions weren’t won by real people but now I know different.  I encourage you, if you see a competition that has a prize you want, enter. You have nothing to lose and who knows, you too might be another Cinderella.

The glass slipper of memories will live forever in this Cinderella’s mind.
And someone missed us while we were gone for the weekend.

My Tweets
Join 275 other subscribers