Ever had a bird’s eye view of the top canopy of a rainforest? We did and what an exhilarating day it made ! We visited Kuranda on the Kuranda Scenic Railway, returning home on the Skyrail. For one who struggles with heights it provided challenges and I am proud to say I rose to the occasion. Our first leg of the journey was the Kuranda Scenic Railway. We raced to the Cairns station following our Google map instructions. Had we stuck with that we would have walked about 6 stairs onto the station, but no, I saw the station and took what looked like a short cut only to find the lift out of action so I had to walk the 30 or so steps up then down onto the platform – a lesson learned. 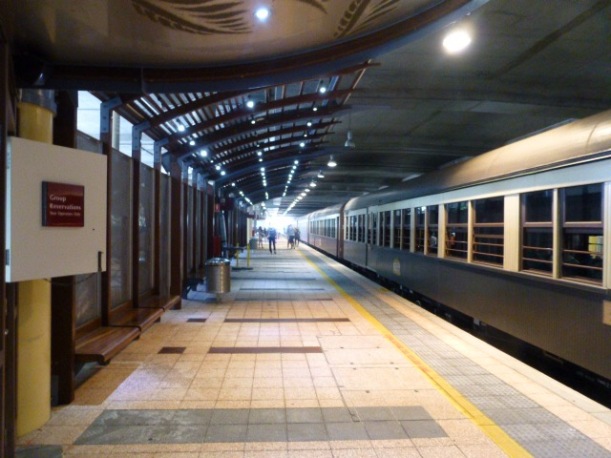 Our carriage was 14, the final carriage on the train. It gave us a great view of the train as it rounded the bends as it made its way to Kuranda I must say. 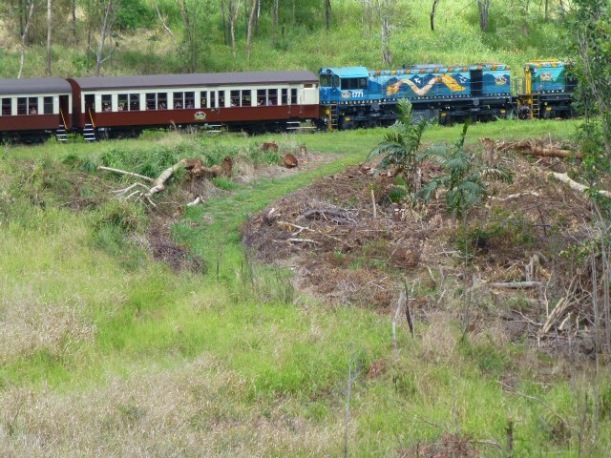 A running commentary was broadcast through the train telling of the history of the railway, and sights along the way. You can take a look at the facts here.  The making of the rail line and its tunnels certainly was an amazing feat considering the use of hand tools and lack of modern day surveying skills.

Sugar cane farms lined the track as we headed from Cairns before giving way to rainforest vegetation, some very deep ravines and spectacular waterfalls. We alighted at Barron Falls for a short photo opportunity then boarded the train again Kuranda bound. 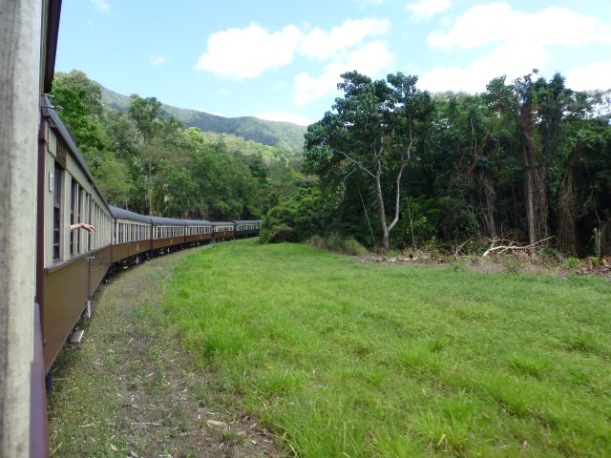 Our return journey from Kuranda was by the Skyrail. We chose the diamond view gondola, paying $12 extra each for the fear factor 🙂 It has a glass bottom so you can enjoy not only looking out but down onto the canopy of this majestic rainforest. The views in all directions were spectacular and even I eventually tolerated enjoyed  the view through the glass. I have a fear of heights, especially over water, so I wasn’t the least bit doubting that our first small stop ( we had been told to expect a few as we travelled) would see our gondola mid way between poles dangling over the river… And I was right! 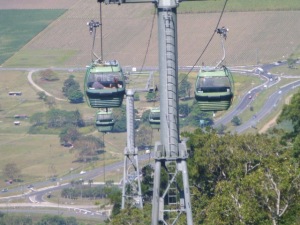 We alighted at Barron Falls and walked the short walks to the lookouts over the falls. They were a closer view from here than from the train station. From there we next alighted at Red Peak again taking a short boardwalk through the rainforest. Standing in awe of the tall trees, green vines and ferns making their way to the light via the trees, brush turkeys digging and sweet bird calls echoing the only sense that wasn’t tantalised was my sense of smell. No this rainforest doesn’t emit an odour. It was in fact the freshly lit cigarette a walker had to ‘share’. He could only have been on the Skyrail for a maximum of about 20 minutes and this board walk was only 200 metres and a return trip was a maximum of 20 minutes yet he couldn’t go without in that short time. He butted it out in a rubbish bin and when I made the comment that it was disappointing to have my time spoiled by his smoke he just stared and walked on. Imagine if that butt then started a fire in the bin then proceeded to the rainforest leaf litter.

The final leg on the Skyrail into freshwater is very steep. We were lucky not to have to share our gondola ( had this luck all the way) and we both sat facing the descent ( the man loading passengers had said it was perfectly ok for us to do that without unbalancing the gondola – of course I needed the clarification of that point). To add to my fun it was gondola 13. The view was amazing as the rainforest gave way to the ocean. By now I was coping fine with the glass floor.